Marrying urban sports with contemporary dance, ISH Dance Collective create an enjoyably high-energy spectacle in the cavernous space of the EICC’s Lennox Suite. The all-male ensemble employ skateboards, rollerskates, BMX bikes and more to half-pipe themselves into the air whilst their colleagues breakdance, perform acrobatics and free-run over the adaptable set. Live music is provided […]

A celebration of the street, 360 Allstars brings together some youthful masters of the scene in an enjoyable high-energy hour that – based on the age of the audience yesterday – will likely inspire many to follow in their footsteps. BMX tricks, breakdancing, basketball wizardry and acrobatics explode like a burst of graffiti on the […]

It’s fair to say the performers of Super Sunday spend as much time in the air during this spectacular acrobatic hour as they do on the ground. Trampolines, see-saws, rings of death: the all-male cast bounce, leap and fly far above the big top floor in ever-increasingly impressive displays of stuntwork and acrobatics. All this […]

Though the audience members that Aaron Crow invites on stage during FearLess appear to be in danger from knives, broken glass and samurai swords, their greatest risk of harm comes from slicing themselves on his cheekbones. That’s not to say the most impressive thing about Crow is his bone structure: far from it. Without a […]

Let’s get ready to rumble… Le Coup is La Clique as directed by David Lynch with a hangover. Banjo-playing preacher men soundtrack mostly silent ruff-wearing acrobats as a ringmaster exhorts the audience to bet on their favourites in this circus smackdown grudge match of the century. There’s a lot to love about Le Coup’s knowingly […]

Birth, love, war, sex, death: all human life is here. From the very first moments, when an inanimate pile of discarded clothing transforms into a jerkily-moving newborn to an unsettling electronica version of I Wish I Was A Mole In The Ground, the ten acrobats of Circa have an uncanny knack of making the seemingly impossible look virtually effortless. In a lesser […] 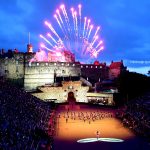 This year’s fabulous Stockbridge Duck Race will be taking place on Sunday 30th June 2019 at 3pm. This is a popular annual event is held to help raise money for local charities and 2019 is its 30th year. The monies collected for purchasing a duck will be donated to St Columba’s Hospice and The Yard. All ducks are […] 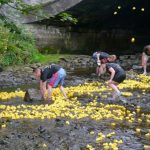 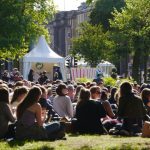 Work is almost complete of the Floral Clock in West Princes Street Gardens. This year the famous Edinburgh clock is commemorating 100 years of Save The Children. Floral clock fact file The Floral Clock was first created in 1903 by the Edinburgh Parks Superintendent, John McHattie. The clock takes three gardeners six weeks to produce, and is trimmed, […] 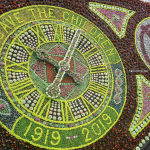