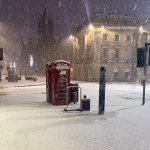 Leith legend, Mary Moriarty has since the 80s been a key part of Leith’s vibrant community. For 25 years Mary was the landlady of one of Edinburgh’s most colourful bars, the Port O’ Leith on Constitution Street where she used to walk on barrels in high heels and where the clientele saw judges, writers, sailors, working […]

Let it snow It’s said that Inuits have fifty different words for snow. On the basis of this standout physical circus from FLIPFabrique, it would seem Canadians have fifty different backflips for it. The ice cold weather loosely connects each of the routines performed by the members of this accomplished and family-friendly troupe. Whether engaged […]

Cabaret at Le Monde is a lucky bag of Fringe variety entertainment put together by one of the best connected promoters in the business. With a different lineup every night, you won’t know who you’ll be treated to until they are up there on stage spurting glittering cabaret goodness all over the front few rows, […]

Filling the gap between afternoon and evening, The Five-Thirty Cabaret is a perfectly timed selection box of delights to set you up for yet another night on the Fringe. With a different lineup each show, you pay your money and let Five Thirty Cabaret make it’s choice of the Fringe for you. This afternoon, for […]

The cocktail VIP I had a strange dream last night. I was in a Vegas cocktail lounge whilst a flame-haired showgirl sang a swing version of Smells Like Teen Spirit accompanied on the piano by the keyboard player from Dexy’s Midnight Runners. I dreamed that Ivy Paige — the showgirl — had such a seductively […]

One giant leap for womankind Where can you escape when life gets too much? When your parents are as dysfunctional as your relationships, and your hopes and dreams seem as unreachable as the stars in the sky? For Nicole Burgio, the engaging and dynamic performer of this impressive one-hander from Fringe newcomers Almanac Dance Circus Theatre, there is only […]

Blinding us with science Since first bubbling over from their test tube onto the Fringe ten years ago, Frisky & Mannish have become firm festival faves, with their concoction of comedy, musicianship and downright fabulousness consistently winning over audiences wherever they pitched their poptastic tent. After a break of a few years, they are back: and happily just […]

Electric circus Billing itself as a decadent circus for adults, Rouge delivers on nearly all fronts (and rears), where the gasps come as much from the ‘did I really just see that?’ moments as they do from the impressive acrobatic feats on offer. A gloriously camp Frank N Furter style ringmaster-of-sorts gets things off with […]

Art for art’s sake Framed as it is around visitors to a modern art gallery, Machine de Cirque’s playful and innovative circus show is a masterpiece. From sardonically exposing the pretentions of gallery visitors to a spellbinding sequence where portraits literally crawl from the canvases, this loose narrative device links a series of ever-more impressive […]